Below are four case studies. All four clients have kindly given their permission to include them here.
Some background details have been changed to preserve their anonymity.

Tom was the Technical Director of a £5m engineering firm in Scotland. An experienced, thoughtful man in his late 40s, he’d joined the business three years earlier to help the MD win more sales in four ways.

First, by raising on-time product delivery as too many custom products were arriving later than promised. Second, by delivering the products faster. Third, by responding quicker to customers’ requests for quotes. Fourth, by introducing new products.

Tom hired four new engineers and invested in new machines. But after three years, results were bad. The most important metric – on-time product delivery – had worsened. There’d been no invention. Product lead times had lengthened and were now behind the industry average. And customers were receiving their quotes even slower than before.

Eventually the MD had had enough. He told Tom that unless he achieved these three goals within seven months without incurring extra costs he’d be fired:

In working with me, Tom’s first challenge was to accept his poor record. This was hard. He prided himself on his intellect and technical know-how. He recognised that his suppressed feelings of anger and humiliation had made him defensive with his senior colleagues. And he realised that his habit of convincing himself that “the criticism I’m getting is unfair” was distracting him from his key tasks.

He let go of his old “I’m right, they’re wrong” attitude. He shifted from anger to determination. Then he focused on what he needed to do and achieved the results you see in the graphs below.

As you can see, Tom transformed his department’s results on every metric, surpassing his goals:

The MD had dreamt of a turnaround, but doubted he’d see it. He told Tom, “This is an astounding success.”  He was right. It was. The triple turnaround boosted sales, adding £90,000 extra margin in seven months (8 times the cost of the coaching).

Case Study #2: From Manager to Leader

Jack ran a manufacturing plant with 250 employees. Everyone knew he had talent. He got things done and always hit his targets. The trouble is, he didn’t connect with people.

A 360° survey showed that others saw him as uninspiring, unapproachable, uncaring and uninterested in their welfare. His peers didn’t trust him – they felt he was only interested in one person: himself. He was good, but the company knew his self-centredness and lack of empathy would cause his best people to rebel or leave the business. So they asked me to help. Jack was shocked when he saw the 360° survey results. He told me, “It was horrible. Humiliating. I couldn’t sleep properly for three days.”

He worked with me for thirteen months. Jack unearthed an intense fear of failure based on a deeper belief that he “wasn’t good enough”, which made him self-centred and over-controlling. He also believed that people weren’t interested in talking to him unless he had a work-related reason for approaching them. So he avoided talking to people in his workforce he didn’t know well, which was most of them. But this meant he wasn’t getting the engagement he wanted.

Gradually, as we worked together, his attitude and behaviour changed. His old negative beliefs melted and he began practising new habits. Then we repeated the 360° survey. There was a turnaround in the way people viewed him, as you see in the graph below.

Now they saw him as visible, inspiring, better at handling conflict, approachable and caring. His peers saw him differently too – now they trusted him. And he was still great at getting results – his latest initiative added £1.5 million to profits, bringing him global recognition within the company.

Two years after the coaching he was promoted to Operations Director.

Diego was VP Finance for the European region of an international software company. Intellectually brilliant, driven and superbly qualified, he was also a talented athlete who excelled at tennis. He was ethical, energetic, forceful and focused. A real high-achiever.

But he wasn’t good at leading people. Quite the opposite in fact.

Many colleagues described him as abrasive, moody and irritable. Others saw him as hostile, dictatorial at times and disrespectful towards others’ views or explanations. They felt his interpersonal sensitivity and skill didn’t match his intellect, financial nous and energy. The board recognised Diego’s ability. But as talented as he was, they wouldn’t promote him if he couldn’t change his attitude and behaviour. Even worse, they felt he was in danger of derailing.

We worked together for 12 months. Before long he had two big insights.

First, that he believed he had to micromanage his staff to avoid any risk of failure. For Diego, failure wasn’t an option. It would be too humiliating. Anything would be better than that.

Second, that he’d seen the idea of spending time connecting with people outside his team as time poorly spent. Why? He told himself they weren’t significant enough to justify time away from his family. But that wasn’t the real reason. He thought they weren’t interested in him – that they’d ignore him if he started non-financial conversations. So he avoided engaging with people.

Having surfaced and dissolved these beliefs, Diego worked hard on changing his behavioural habits under pressure. When we compared his mental performance state and behavioural skill before and after the coaching we found this: 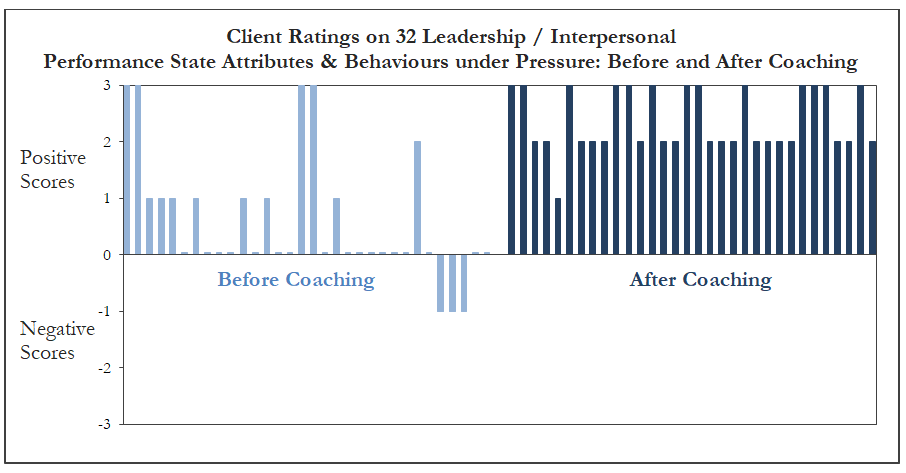 As the graph shows, there was a huge shift pre- and post-coaching. Now colleagues and staff saw him differently. His two biggest critics said: “It’s such a big shift that it’s surprised me” and “It’s a transformation”. A board member told Diego, “This is a phenomenal turnaround.”

Sarah worked for an international advertising agency.  She’d just been promoted to Managing Director of a new division handling major customer accounts when I met her.

Her new role – and her division’s success – was central to the agency’s future. But it was a tough challenge because she’d have to change the way the company handled its biggest clients. This meant taking some power from fellow MDs – leaders of the company’s more established subsidiaries – who’d previously ruled the roost. She’d have to excel at influencing them while getting out and about to attract support for the new way of doing business … and simultaneously grow her division at breakneck speed.

Sarah knew her stuff. She’d worked in the industry all her career. Her staff liked and respected her. But she was nervous around her peers. At leadership team meetings she’d be hesitant and unassertive. She had to psych herself up before potentially difficult conversations with peers or her boss. She was also so nervous during presentations that she’d visibly tremble. In short, there was a risk Sarah would fail to lead the change her firm so badly needed.

In working with me, Sarah discovered subconscious beliefs that made it hard for her to express a contrary view and assert herself confidently with peers. The beliefs caused four fears. That they’d exclude or isolate her. Or out-argue or perhaps ignore her, leaving her feeling powerless. Or that she’d find herself in conflict, causing colleagues to dislike her. And finally, that it was risky to be out front and visible, which is why she trembled in presentations.

As we worked together, Sarah abandoned these beliefs and practised new habits under pressure using a tool I call 4R. Within 15 months her confidence and leadership presence had grown. As this graph shows, she transformed:

Sarah felt the difference and everyone else noticed it. In fact, the change in Sarah, according to her peers, was nothing short of remarkable. This made a difference to results. Her personal success rate on new client pitches shot up from 50% to 100%. This alone is likely to add £1.5 million to profits within a year (an ROI of 55 times the cost of coaching). She also halved people turnover in her division, which should add another £0.3 million to profits, while raising their overall engagement level to 81%. Two years on from the coaching, Sarah continues to win praise..