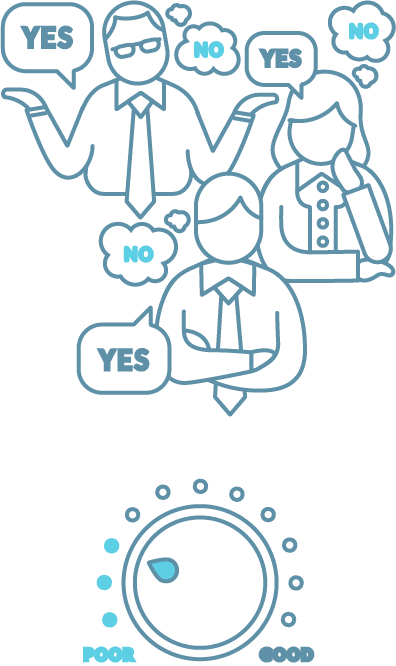 It’s hard getting a bunch of high-achieving adults to perform a task together when they have different priorities, blind spots and opinions. For example, in your team have you noticed:

Maybe you feel your colleagues aren’t fully committed to the team’s goal. Or perhaps it feels risky to say what you’re really thinking and feeling in team meetings. And if you’re the leader, you may feel you’re bearing too much of the load. If so, it’s not surprising if you’re feeling frustrated, tense or worried. You’re not alone. These problems affect most teams, especially leadership teams.

The trouble is, problems in your leadership team infect the rest of the organisation because together your hands are on the climate control dial. Why does that matter? Because research shows that if top executives don’t stand shoulder-to-shoulder as a team, their efforts to change mindsets and behaviour in your organisation will fail.

Your most urgent challenge?

Think of a few outstanding companies. Why are they exceptional? Because they’re great at either innovation, disrupting old industries with a new business model, executing strategy, improving customer service, growing sales or cutting lead times. Beyond the start-up stage, their results didn’t come from individuals working solo. They relied on people working together across disciplines to mesh together multiple skills and experiences.

They prove that delivering superb results while standing out from competitors relies on combining human talents. And teams are the key to that. Simply put, your ability to build and nurture teams determines whether you achieve consistent high performance in your business. And it means starting with the top team so they model the way for everyone else.

That’s huge. But it’s also urgent. Why? Three reasons. One, it’s getting harder to stand out from competitors because it’s easier than it was to cut costs by shifting operations to lower-cost countries. Two, more and more firms are using similar technologies. Three, millennials (people born between 1982 and 2002) will be 50% of the workforce by 2020. Unlike previous generations, they strongly prefer to work in teams. So if you can’t give them what they want, they’ll leave or they won’t join you in the first place. Either way, your results will suffer.

Where’s your team now? Where could it be? 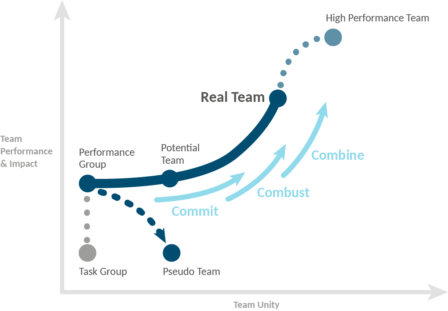 In trying to raise their game, most clients struggle to define their current state and how they want to be as a team. That’s their first problem. So I show them the team progression curve.

There are three kinds of work groups: task groups, performance groups and teams.

A Task Group (e.g. a social club committee) has low unity and performance. It has a task but doesn’t need to keep improving its results in the face of competition. And individual members don’t feel the pressures to deliver you find in the other work groups. You don’t see many Task Groups in business.

Performance Groups are also low on unity, but they perform better. That’s because they have to. Like Task Groups, they have a job to do, but they face greater pressure to improve results while needing to fight off competitors. They follow a hub-and-spokes model. Members largely work apart to deliver results (because that’s enough to achieve their goal) while the leader concentrates on coordinating and holding them accountable. They occasionally meet to make decisions and share data. Most so-called “management teams” and “leadership teams” are in fact Performance Groups.

A Real Team is different. It’s more united and performs better. Much better in fact. Think of it as a Performance Group facing a tough challenge that’s forced it to combine members’ skills and experience to produce results they couldn’t achieve apart. Like solving an important problem. Or creating something new. Or jointly executing a plan. It still has a leader, but it’s climbed the curve by abandoning the hub-and-spokes model and navigating the three team phases – Commit, Combust and Combine – to deliver extraordinary results other groups can’t match.

High Performance Teams are just extreme versions of Real Teams. They’re often talked about, but research shows they’re rare. They differ from Real Teams in three ways. First, team members show extraordinary commitment to the goal (which feels more like a cause). Second, they’re unusually dedicated to supporting one another. Third, they share leadership to the point where it’s hard to tell who the leader is when they’re in action.

Here’s the bad news: you can’t create High Performance Teams on purpose. The good news is that you can knowingly create Real Teams.

The two other positions on the curve? Potential Teams realise they’re facing a challenge they can only handle by becoming a Real Team. They’re figuring out their goals and feel more “together”, but they’re only starting to climb the curve. Pseudo Teams pursue high unity but achieve worsening performance. Why? Because they haven’t shaped a motivating goal and in chasing harmony above all else they lose the results focus they had as a Performance Group. They usually end in bouts of buck-passing and finger-pointing. Frankly, Pseudo Teams give Real Teams a bad name.

I use this metaphor to sum up the curve: imagine a distant mountain rising sharply from a marshy plain, a bit like the north face of the Eiger. The plain is the gap between Performance Group and Potential Team. Hidden in the marshes are treacherous patches of quicksand. The quicksand traps represent the Pseudo Team. You know the view from the summit (Real Team) is worth the effort of getting there, but you want to avoid the quicksand. The mountain’s steepness symbolises the difficulty of shifting from Potential Team to Real Team.

So where do you see your group on the curve today? Where do you want it to be? 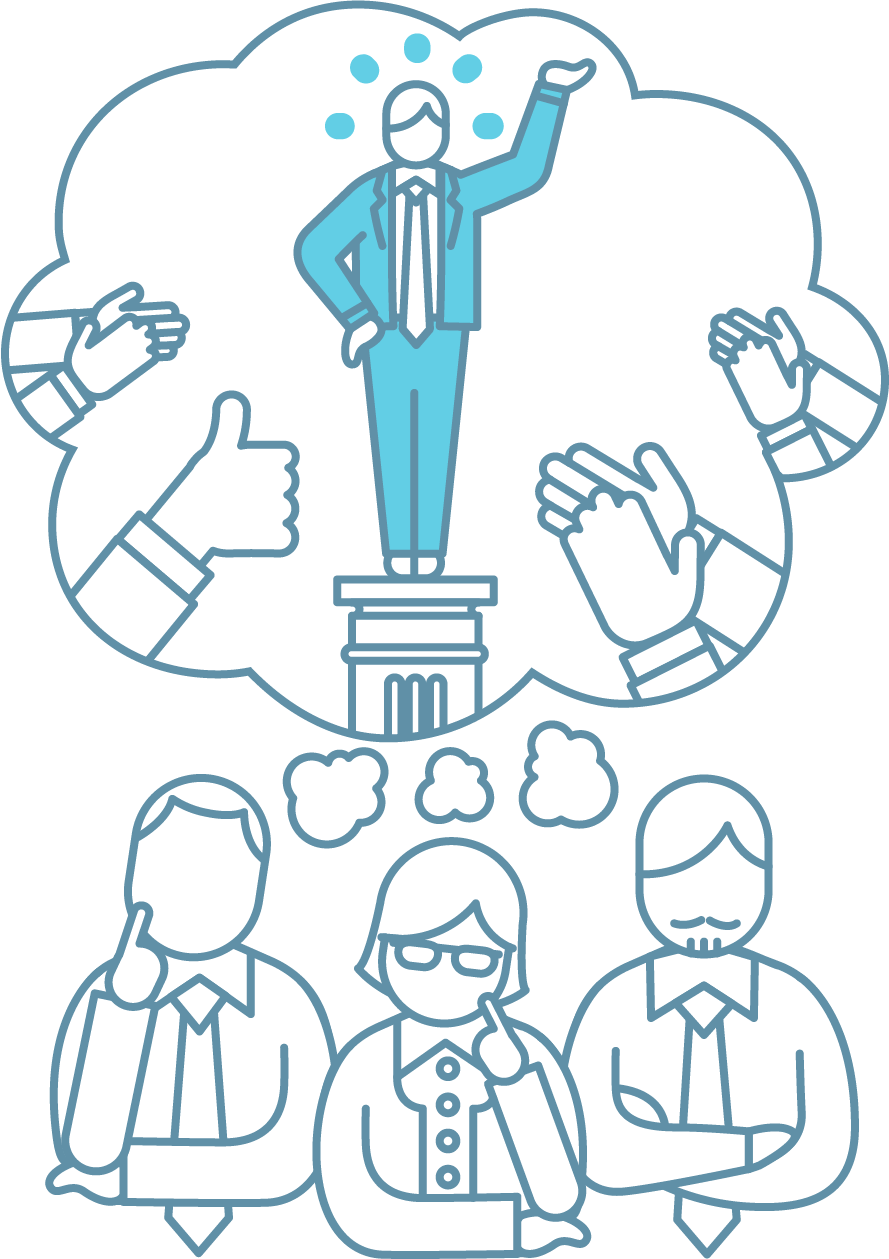 If you’ve tried fixing your team problems, maybe you arranged a one or two-day teambuilding event. Did it work? Most clients say, “No”.

One reason is the false idea that you can build real teams in one day. Or two days. You can’t. Becoming a team means learning and practising winning habits, which takes time. Another is believing that “teamwork” alone produces real teams (remember the Pseudo Team trap). A third reason is that most team bonding exercises aren’t relevant to your real-life challenges.

Did you avoid those traps but still end up disappointed? If so, it’s probably down to three problems that many teambuilding consultants and coaches aren’t aware of:

This is why old approaches to getting teams up the curve so often fail. And why we need a new approach to team building for the 21st century, especially for senior teams.

A new approach to team coaching

I use my experience as a CEO, my psychological training and the ideas in my new book on teams to offer a measurable coaching process for senior Performance Groups wanting to boost their results to Real Team level within months.

Remember, this is team coaching not training. Unlike a trainer, I don’t impose my goals on you. I agree the agenda with you, meaning you remain in control. And it’s not a pre-programmed course. Your specific goals, issues and rate of progress define the contents and pace.

You could compare my approach to a music producer coaxing a band to create the best sound they can – both in the studio and when they’re performing on their own, live on stage. Like a producer, I don’t tell you what to do, but I help you achieve the best results you’re capable of.

My approach to team coaching is distinctive in that it’s measurable, inside-outside and based on guided accelerated learning. This makes it ideal for teams under pressure, especially top teams.

By “measurable“, I mean you’ll not only set your coaching goals, you’ll see how far you’ve progressed visually with performance graphs.

“Guided accelerated learning” means you quickly master the principles of team building in action, working with live issues, so together you can think clearly under pressure, just like an elite sports team. That way you’ll keep your performance high without my help after we finish.

My senior team clients have boosted their results and moved up the progression curve. Here are before-and-after coaching profiles for two top teams I’ve coached in different industries: 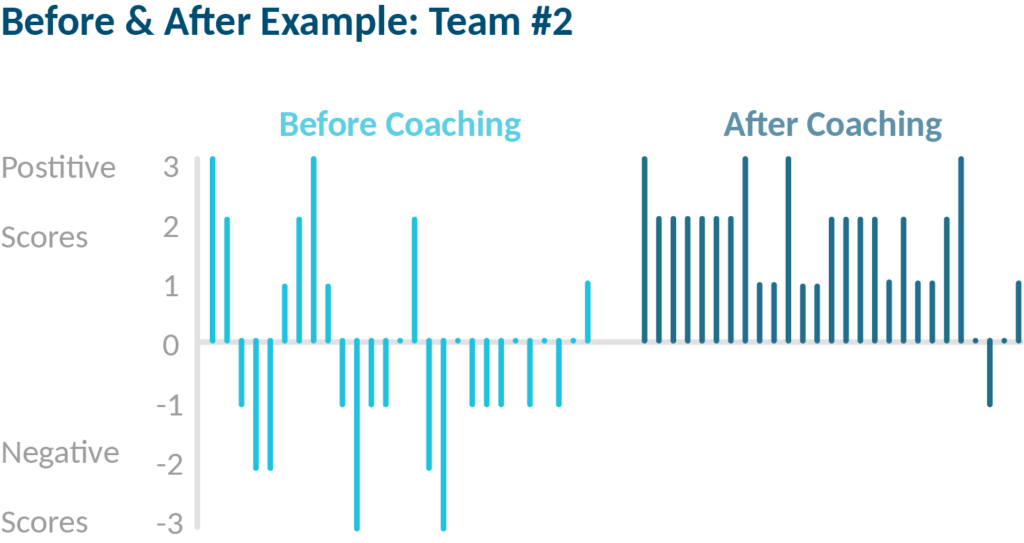 Each bar represents a team quality (e.g. skills and knowhow) or behaviour (e.g. saying what they really think and feel). Scores above the horizontal line are strengths while those below are weaknesses. Can you see the differences between the light blue bars (before coaching) and dark blue bars (after coaching)? They show the huge shift in both profiles.

Both teams upped their game rapidly. They removed their greatest weaknesses while boosting their strengths. People outside the two teams confirmed that they’d changed. More important, both teams delivered results they’d struggled to achieve before.

The newly-hired European president of a $500 million company was worried. His business was growing market share and margins were good, but he felt they wouldn’t hit their long-term target of being #2 in Europe without shifting direction. He was wondering: “Am I right? And, if so, what are we going to do?”

He found himself hesitating for two reasons. First, he suspected that any change of strategy would be controversial. Why? Because it would demand a new vision, a new agenda and mean committing to fresh initiatives while switching off old projects to create capacity for action. Second, he’d inherited a group of independently-minded colleagues who largely worked apart and wouldn’t take kindly to someone telling them to change direction.

He decided not to impose his views. Instead he brought me in to guide him and his nine colleagues through a team coaching process with three aims:

We embarked on a nine-day three-phase programme over seven months. Woven into the coaching were exercises to create a stronger sense of togetherness, openness and trust. Why? So that when they worked on the intellectual content, they said what they were really thinking and feeling and genuinely committed themselves to following through.

Phase #1 took 2 days. It focused on turning the “Reach number two in our industry” aim into a firm sales target and then producing a shared forecast to see what size of gap they were facing. They were shocked. They found that – even if all of their new products and geographical expansions succeeded – they’d miss their target of being #2 by 5% points of market share (or $140 million in sales). Sure, they’d grow faster than the market, but they’d miss their chief ambition by a mile. What did they see as their biggest single issue once they’d learned this? That they lacked a compelling vision.

Creating this vision became the aim of phase #2, which took place over 2 days. Having examined their shared values, competencies, ideas, customers’ aspirations and competitors’ weaknesses they carved out a simple but remarkable vision. A vision that excited them. A vision they wanted to be part of. A vision they believed could plug the $140 million gap.

Phase #3 took place in two parts over 5 days. We focused on action alternatives, assessment of options, action choices and commitment to actions. Not surprisingly, it produced heated debate.

The result? They achieved the all-important dissatisfaction with the status quo needed to shift them into a higher gear. They created a distinctive vision giving them a real chance of achieving the #2 position in Europe. And they agreed a programme that united them and gained their European subsidiary MDs’ backing. The HR director, who’d been present over the 9 days, wrote afterwards to say, “Terrific… an energised team who want to make a difference.” Three years later – two years ahead of target – they became #2 in Europe. As I write this seven years on, they are now #1.

It has three aims. One, to help you detect the main issues in your management group. Two, to help you assess whether it’s time for you and your colleagues to become a real team. Three, to help you see where your chief challenges will lie as you climb the team progression curve.